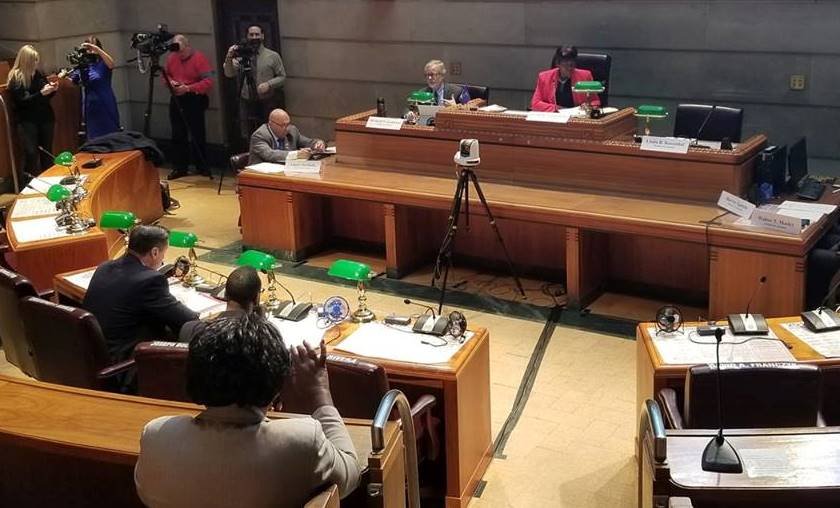 PUBLIC HEARING ON CANNABIS: Taking testimony at the Assembly hearing in Buffalo on legalizing adult use of marijuana. Assembly Member Crystal D. Peoples-Stokes of Buffalo, Assembly sponsor of the bill to legalize adult use, is presiding over the hearing.

The term "cannabis" covers both marijuana and hemp.

A bill to allow, regulate and tax production, sale, and adult use of cannabis, on much the same basis as alcohol, has been introduced by Assembly Member Crystal D. Peoples-Stokes and Senator Liz Krueger; I am a cosponsor. People hear the term "recreational use" and think the issue is about people having fun. The issue is really about changing a system that destroys tens of thousands of lives a year. Support is growing around the country. A recent Quinnipiac poll found that 58% of Americans support it.

Gov. Cuomo is expected to present an adult use bill in January. I and many others want to make sure that this new industry is not dominated by a handful of big corporations. We need to make sure there are opportunities for small businesses, especially those owned by people from the communities most hurt by the current system. This is like setting up NY's regulation of alcohol in 1933 after Prohibition ended.

Health care professionals and nonprofit groups testified at the hearings in support of the bill.

In November, the NYS Commission of Correction Medical Review Board reported that the deaths of about 50 prisoners in New York over the past five years could have been prevented with simple medical treatment.

The State has a constitutional obligation to protect the health of inmates in its custody, whether those inmates have been convicted of a crime or not. I have introduced legislation to give the NYS Department of Health (DOH) more oversight over prisoner medical treatment. Health care for inmates in state prisons is currently mostly provided and overseen by the NYS Department of Corrections & Community Supervision, or "DOCCS." In local jails, it is under the county sheriff or NY City's Department of Corrections. 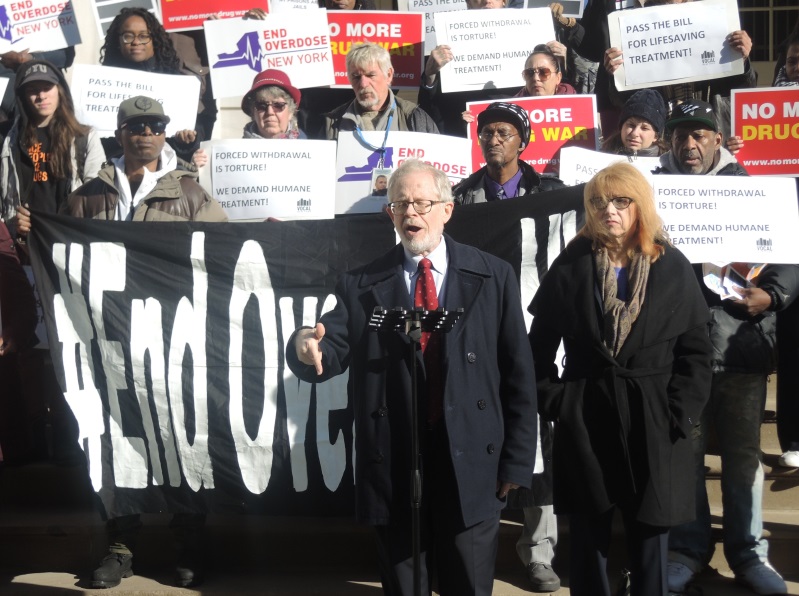 BETTER MEDICAL CARE IN PRISONS AND JAILS: In November, I spoke at a City Hall rally to support better medical care and medication-assisted treatment substance use in New York's prisons and jails. (At right: Assembly Member Linda Rosenthal.)

In the past, Commission of Correction review panels have repeatedly cited the failure of prison and jail medical staff to conduct basic checkups and mental health screenings. The number of health care providers employed by DOCCS has declined.

A law I passed in 2009 gives DOH authority to review the quality of the health care relating to HIV and Hepatitis C and order changes. Advocates and officials agree it has been very effective. My new bill would expand that law to several other key areas of inmate health services and require DOH to study health care staffing levels in correctional facilities and issue biennial reports on their findings. Prisoner health care must be significantly improved and staffing levels should be regularly monitored. DOH is better equipped to oversee medical care than are DOCCS and local jail authorities.

The 13th Annual West Side Tenants' Conference will be held on Saturday, December 8th from 9:30 am - 4:00 pm at the Fordham University Law School at 150 West 62nd Street between Amsterdam and Columbus Avenues (just south of Lincoln Center). It's a great chance for tenants to learn about their rights as well as find out how to get involved in the larger housing rights movement. This year's conference features New York State Assembly Speaker Carl Heastie as the keynote speaker. I will also be participating in a panel discussion on Illegal Hotels at 2:30 p.m.

Workshops will include: Finding Affordable Housing; Housing Benefits for Seniors; Organizing for Stronger Rent Laws; Succession Rights; Illegal Hotels; Illegal Construction; and Tenants Movements in Other Cities. Free breakfast and lunch will be provided, along with a free legal clinic and other resources and information on tenants' rights, organizing, and other topics.

This is an important conference for tenants to learn about housing issues like strengthening tenant protections, illegal hotels, and other housing issues in the upcoming session of the Legislature.

The 2019 legislative session will be especially important. The rent laws that protect two million New Yorkers (including some in the suburbs and upstate) will expire in 2019 unless the State Legislature renews them. Everyone needs to get involved to strengthen tenant protections. We need to repeal vacancy deregulation, which has allowed landlords to remove at least 400,000 apartments from the rent-regulation system. These apartments need to be returned to rent-stabilized status.

If we don't strengthen the rent laws and tenants' rights, we will continue to lose affordable apartments faster than we can create them.

For more information or to RSVP, you can register online at https://www.eventbrite.com/e/west-side-tenants-conference-2018-tickets-52159764259. You can also register by emailing jfurlong@hcc-nyc.org or calling Natalie Naculich of HCC.

I am deeply troubled by the deal that New York State and City have struck with Amazon. It provides New Yorkers few if any guarantees of public transparency, local input, community benefits, or labor standards, despite the massive tax breaks and subsidies being provided to a multi-billion-dollar corporation.

Amazon's development plans should be subject to New York City's Uniform Land Use Procedure (ULURP), which includes public input and elements of democratic decision-making. Instead, it is being pushed through using the 'local override' powers of the State's Empire State Development Corporation.

There should be tangible benefits for the neighboring communities - such as workforce development - clearly established in concrete, specific terms.

Apply for HEAP to Lower Your Heating Bill

New Yorkers are no strangers to the harsh weather that the winter months can bring, and with the season upon us, it's important that everyone be able to keep their homes warm. The Home Energy Assistance Program (HEAP) can help cover the costs of high heating bills.

Applications for assistance are now being accepted on a first-come, first-served basis. Eligibility for HEAP relies on factors that include income, household size, primary heating source and whether a member of the household is under the age of 6, over the age of 60 or permanently disabled. This year, a family of four that has a household income of up to $4,598 a month may qualify for help, and each household can receive up to $726 in assistance. Applications for an extra emergency benefit open on Jan. 2, 2019, and are available to households that are out of fuel or are in danger of having their service shut off.

HEAP has proven to be a critical lifeline to hundreds of low-income families and senior citizens across the state who rely on its assistance to keep their homes warm as high energy bills eat up more of their paycheck or fixed monthly income.

To learn more or to apply for HEAP, you can visit www.mybenefits.ny.gov or contact the New York City Human Resources Administration at www.nyc.gov/html/hra/html/services/energy.shtml or call 1-800-692-0557. You can also call the New York State Office of Temporary and Disability Assistance Hotline at 1-800-342-3009.

Survey on Abuse & Neglect of People with Developmental Disabilities

The NYS Disabilities Association and Network (NYS DAAN) is conducting a community-wide needs and gaps survey as part of a comprehensive research study being funded by the NYS Developmental Disabilities Planning Council. The study will be used to develop a statewide strategic plan for the Prevention of Abuse and Neglect of People with Developmental Disabilities. The survey will remain open until the target number of responses is received from each of the respondent groups or December 28, 2018, whichever comes first. I encourage you to participate by filling out the survey, particularly if you are:

Before filling out the survey, please keep in mind that:

The survey can be accessed by clicking the link at: https://app.surveymethods.com/EndUser.aspx?CBEF839BC28B9C91CC or by contacting Kathryn Cappella of NYS DAAN at 585-533-1154 or at kcappella@supportcenteronline.org.