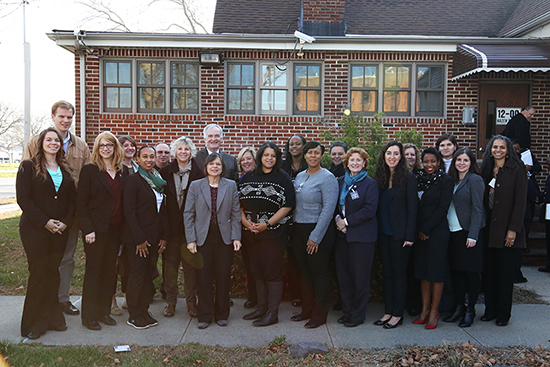 The Rose M. Singer Center is the island's only female facility; opening in 1988 as an 800 bed facility for female detainees and sentenced inmates. Since its inception additional housing has been constructed to increase capacity to meet current demands. Members toured the facility visiting the 25-bed baby nursery where inmate's children can reside up to one year, as well as the new Mental Health units added in 2013; the Clinical Alternative to Punitive Segregation (CAPS), which houses inmates with serious mental illness who have infracted; and the new PACE unit (Program to Accelerate Clinical Effectiveness), which houses and provides therapy for violence-prone mentally ill inmates. Along with helping inmates receive mental health care, these unites have helped keep staff safer as the number of assaults have substantially decreased since its inception. Members spoke with individuals residing in the PACE units who reported that they felt the new housing units helped them develop a greater sense of responsibility and self-worth.

Additionally, the Rose M. Singer Center utilizes many programs to aid its population in lowering recidivism and to help equip the inmates for a successful life outside of the corrections system. A Road Not Taken (ARNT) assists inmates with substance abuse and addiction issues. ARNT focuses on creating a therapeutic community where inmates work through their addiction issues utilizing a structured environment, daily group counseling, homework, and bi-weekly individual counseling sessions. The program has received positive feedback from both those participating and the court system; DOCS has reported lower rates of violent incidents in program units partially attributing this to the structured environment and focus on shared treatment goals. Members met with individuals currently enrolled in ARNT who spoke positively about the program saying that ARNT helped them identify negative behaviors and develop ways to avoid falling back into old patterns once they are released.

For more information about the Rose M. Singer Center or any other women's issue, contact the Legislative Women's Caucus office at 518-455-4347or lwc@assembly.state.ny.us.